Hello again, treating you all to a second review today! Checked out another found footage horror film called 'Nightlight' today, it had a few familiar faces and was much better than I had anticipated so here we go. 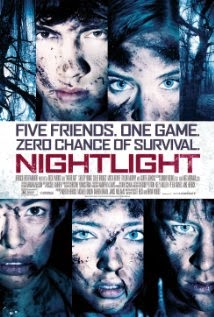 Five friends head out into the woods to play a series of games, one of them being a night time version of hide and seek, but this game doesn't end well for all of those involved when Ben (Mitch Hewer) goes missing. The group end up separated and soon realise the tales of these haunted woods were true and someone or something is after them and it won't stop until it gets revenge but revenge for what?

'Nightlight' has far too many similarities to that of 'The Blair Witch Project' and yet, it fails to execute itself as well. The characters are nothing special, in fact we don't really learn an awful lot about any of them besides Robin (Shelby Young) and even that is a shallow attempt at building a reason for their demise.
As far as low budget, found footage horrors go 'Nightlight' certainly isn't one of the worst I have ever seen, nor is it the best but it does provide cheap thrills and the usual shaky camera with minimal lighting. The film itself doesn't rely too much on gore and focuses on the threat off camera, by building up the anticipation of what lies off screen this provides a much better atmosphere in a film like this. 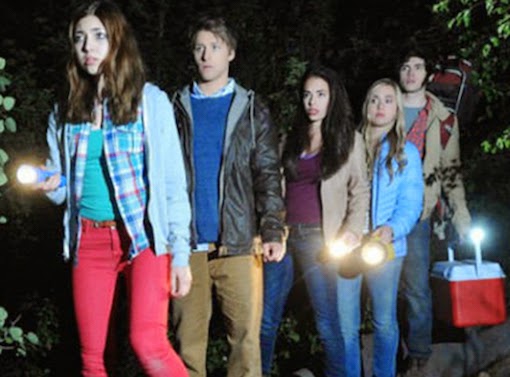 There are several moments throughout the film in which Scott Beck has gotten it oh so right and yet he manages to mess it up with the trembling hands of Robin who drops the camera every time things are about to get interesting. Whilst Robin walks through the darkness she realises her only source of light is to set off the flash on the camera, with each step she clicks the shutter button and the flash reveals her surroundings for a brief moment. This was one of my favourite parts of the movie, it does leave you with baited breath even though you know exactly what is coming.
'Nightlight' doesn't have a strong storyline and the dialogue consists of too many teen clichés but the audience do get an explanation from Robin as to why these things might be happening to them and who she thinks is behind the torment and then the film ends with a suicide video from their ex classmate. Nothing special or out the ordinary, just another predictable ending.
Not a complete shambles but definitely not worthy of another watch 'Nightlight' takes the handheld camera shots a little bit too seriously meaning half the time you have no idea what is going on.