Hi guys! I thought I'd start off with an older film for my first review, partly because I've wanted to watch Jacob's ladder for a while now and partly because I don't want to post a badly worded review of a new film. I want to practice my analytical skills and train myself to watch a film for both pleasure and work.

Jacob was a soldier in the Vietnam War; upon his return home and back to reality, he is plagued by visions and hallucinations. As these visions begin to occur more often and become more disturbing, Jacob realises he is slowly losing his grip on reality. He begins his own battle to find the truth and must now fight his own personal war to keep a firm grasp on his sanity but to do that he has to be able to separate what's real and what's not.

Straight from the word go the viewer is thrust into the centre of the action with fast paced shots, sharp cutting from scene to scene and several point of view shots. It's chaotic, blurry and a little bit frightening as the viewer is unable to grasp what is quite going on.
Lyne allows the viewer to build a connection with Jacob from the very beginning; the use of close-ups and point of view shots include them in the film and this carries on throughout. The whole film feels a little dark, almost representative of Jacob's outlook on life after returning from the war and this is put across to the viewer in the surroundings, the lightings and even certain angles in some shots. Lyne's use of slow motion whenever Jacob experiences a hallucination coincides with the surreal feeling it is supposed to give us.
Tim Robbins brings Jacob's character to life with a powerful performance representing what it is like to suffer from post traumatic stress disorder. He is believable and it is very easy to be drawn in by his character; I was rooting for him the whole time and it's almost as if you are on the same journey to uncover the truth.

Jacob's Ladder is a fast paced, hard hitting film with so many twists and turns; leaving your head reeling in confusion and desperate for answers throughout.
I thoroughly enjoyed this film and would definitely recommend it to others. It can seem a little long winded but if you stick it out I promise you won't be disappointed. 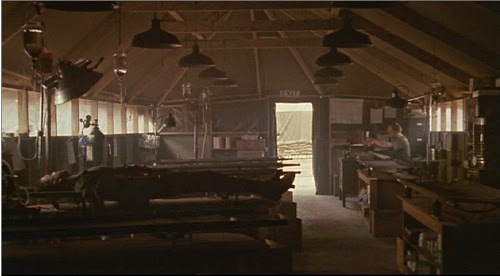