Recommended film of the week.


Hi guys,
I haven't had the chance to watch any films these past couple of days but thought I'd give you guys a chance to watch one of my recommendations.
I've watched so many films throughout my life time and find it very difficult to pick a favourite, or even a top 10 for that matter so from now on I am going to post one of my favourite films each week. I'll give you all a bit of information about the plot and some reasons why I love it and if you do check it out, make sure to leave a comment and tell me what you think.

Film of the week: 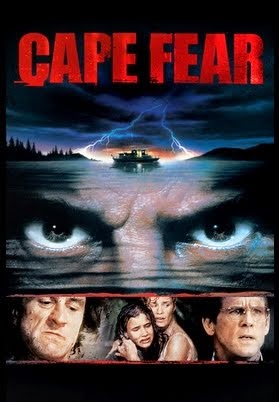 Yep, that's right. Cape Fear (1991) Directed by the wonderful Martin Scorsese and starring the incredibly talented Robert De Niro.
This film has been one of my favourites for over 10 years now; it is an eerie tale of obsession and if you're a little bit squeamish I'd probably give it a miss but you'll miss out on an intriguing, dark tale and fantastic acting by De Niro and Juliette Lewis.
The story revolves around a psychopath who, upon his recent release from prison, is desperate to exact his revenge on his former lawyer, who he believes was responsible for getting him sent down. Cady (De Niro) watches the family for a while, figuring out their conflicts and their darkest fears and uses all of those against them to cause chaos. Cape Fear is a powerful film with a dark atmosphere and Scorsese steered away from the usual 'bad remake' that other directors suffer from and in fact, created a brilliant thriller that you can watch again and again.

So give it a watch guys, let me know what you think!
Posted by Unknown at 11:45