Hi guys! I'm sorry it's been so long but I will make it up to you with a review of the eagerly anticipated 'American Sniper'. Being a huge fan of the war genre I was incredibly excited for it's release and I wasn't disappointed. 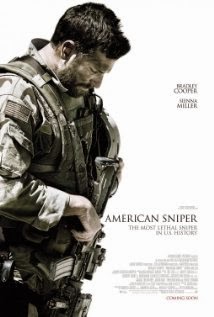 
American Sniper was directed by Clint Eastwood and follows the true story of the U.S Military’s most lethal sniper, Chris Kyle. Bradley Cooper portrays Kyle as he is sent out to Iraq to protect his fellow soldiers but when the opposition realise how lethal he actually is, they put a bounty on his head and he quickly becomes a prime target. Despite the stress and worry his wife has been put through, Kyle goes on to serve four tours of Iraq but when he finally decides to retire he realises that he will never truly escape the war.


American Sniper is a powerful and thought-provoking film that delves into the realities of the Iraq war and the soldiers who risked their lives every single day. Cooper’s portrayal of Chris Kyle is so believable and moving, it allows you to distance yourself from the Hollywood star and invest in the character of Chris Kyle. I believe the film would have benefited from paying more attention to the after effects of the war and how soldiers deal with Post Traumatic Stress Disorder. American Sniper does cover this topic briefly but it focuses more on dramatic gun fights and Kyle’s ability to somehow be good at everything.
Cinematic, action packed and incredibly tense, American Sniper looks beyond the ‘legend’ of Chris Kyle and allows the audience to almost put themselves in the centre of the war and witness the true horrors he had to endure. There were several points throughout the film when I had to hold my breath and even shield my eyes from one particularly brutal scene, it does shock the audience but that is the harsh reality of war and it’s clear Eastwood has created an inspiring and honest masterpiece.
I am a huge fan of the war film genre and American Sniper is definitely up there with the best, it manages to provoke all of your emotions. There were times when I was incredibly tense and hoping Kyle would make it out of the dangerous situations, it also brought a tear to my eye time and time again and most of all, it made me feel an overwhelming sadness about these wars and the effects it has on the soldiers. Bradley Cooper is the main attraction in American Sniper and his ability to take on this role with sympathy and elegance is worthy of an Oscar.
American Sniper is one of those films you can watch several times and enjoy it again and again it offers so many depths of the story and will never cease to blow you away. I would definitely recommend this film to all of my friends and I already know it’s going to be joining my DVD collection when it’s released.