Hi guys, apologies for neglecting the page but I'll be blatantly honest with you, as of late I have been indulging in soppy, cheesy rom-coms and I am pretty sure you don't want to hear about that. Anyway I am back now and I am going to start you off with my review of Taken 3, hope you enjoy. 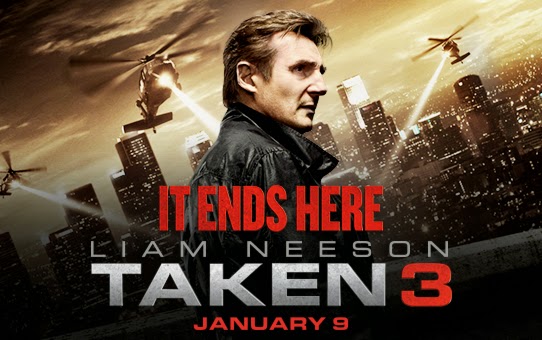 Bryan Mills is thrust back into a chaotic world after his ex-wife is brutally murdered in his apartment and he is being framed for it. Mills (Liam Neeson) is forced to go on the run from the CIA whilst attempting to discover who really killed his wife and why they are trying to frame him.

Taken 3 is just like the rest of the franchise; full of action, car chases and gun fights but a little bit far-fetched. I was more shocked at how good Liam Neeson looks for his age than the plot of the movie itself, but overall it's not as bad as everyone makes out. Taken 3 consists of the usual twists and turns, guessing games and almost unbelievable fights in which Mills manages to defeat several men with nothing but his bare hands and although nobody in the movie is actually 'Taken' it does make for quite an interesting change.
Many believe the Taken franchise should have stopped after the second but all in all it does what it's supposed to and provides the viewer with plenty of action, even if the plot is a little bit silly. The relationship between Mills and his daughter Kim runs much deeper in the third instalment and the character development does continue from the last but it also lets us see that Mills isn't a hero and is in fact, rather selfish. In Taken 3 we witness Mills drag his golfing buddies into his dangerous world and watch them pay the price so that Mills can protect his daughter, which seems to be his only priority. Saying that, I am still a huge Neeson fan and I would probably watch Taken 3 again if it was on the television.
If you're a huge action movie fan and love destructive car chases, repetitive combat scenes and Liam Neeson saying 'I will find you and I will kill you' then you should definitely give this film a watch.