The Boy Next Door follows a suburban school teacher Claire (J-Lo) as she tries to come to terms with the fact that her husband had an affair. Whilst getting back into the dating scene she is introduced to Noah (Guzman), a new high school student who just so happens to be incredibly helpful, polite and quizzed up on English Literature, the subject that Claire teaches at the school. After getting drunk one night she makes the mistake of taking Noah to bed which leads to an insane obsession with her and she soon realises he won't stop until he has her all to himself, no matter what the cost. 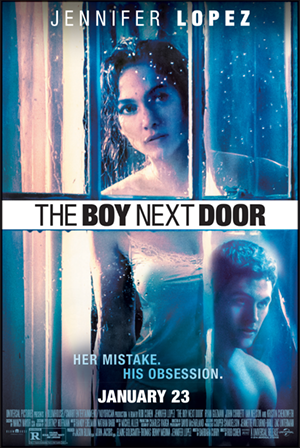 It's always nice to have a good looking cast on your screen but even that is not enough to help this film amount to anything. It's predictable and in all honesty, I've seen it all before, several times. Obsession, lust, crazy murdering stalker, you know the usual...
The Boy Next Door was much more endurable than I had first anticipated but it's slightly embarrassing to see Jennifer Lopez be an executive producer for a film which revolves entirely around Jennifer Lopez. It's obvious she has paid more attention to making herself look sexy in every shot than the actual production and narrative and characters, or anything for that matter. Yes there are times when The Boy Next Door provides a cheap thrill but it's so tediously obvious what the outcome is going to be in every single situation that it becomes a bit of a farce.
Guzman takes up the role of a psychopathic stalker with great ease and he was probably my favourite part of the movie but that may just be because he is nice to look at because none of the character's have a lot of depth and when you finally discover Noah's back story it's so ridiculous you almost want to laugh out loud.
The ending did take me by surprise but not for reasons you would expect, it's gory and silly and doesn't fit in with the rest of the movie whatsoever. It's feeble attempt to go out with a bang but instead it switches over to a slasher/comedy movie.

Better than anticipated but not something I'd watch again, although there are much worse films out there.