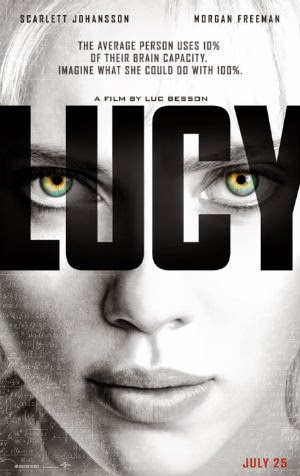 Lucy (Johansson) is forced to traffic a new drug named 'CPH4' but after being attacked by her captors, the bag bursts inside of her and as the drug passes through her system we watch as Lucy's brain capacity increases; allowing her to enhance her physical and mental abilities much further than anyone ever thought possible. As her powers begin to grow she realises that when she reaches 100% capacity she will cease to exist so Lucy sets out to find Professor Norman (Freeman) to help him advance his research and give him all the answers he has been looking for.
But what does happen to the human body when it's brain uses it's maximum cerebral capacity?

Tonight I watched 'Lucy' directed by Luc Besson and even though I didn't thoroughly enjoy the film, it was definitely slightly better than I had anticipated. The film is fast paced and full of action, just like you expect from a Hollywood Blockbuster but the character's lack any real depth. Lucy (Johansson) starts off as a young woman who gets caught up in a world of drug trafficking but it seems as soon as she is able to use more of her brain capacity, she becomes completely robotic and monotone. We see no emotion, no feelings, no character and it's very difficult to connect with her. I was also disappointed about the lack of Morgan Freeman throughout the film, him being one of my favourite actors and one of the main reasons I decided to check Lucy out.
'Lucy' has plenty of high cost action scenes; gun shots, car crashes, the usual and if you like that sort of thing then you can probably get over the fact that this film actually lacks any real storyline and character. The special effects were intriguing and eccentric, there were several scenes included throughout the film that were a little bit gruesome too and I can't deny the fact that it was impressive in parts.
Overall I found 'Lucy' to be rather hollow and there were definite elements of 'Limitless' but if you're trying to pass some time and can't find anything else to watch then give it a go. It's action packed, a little bit absurd and does spark the question, 'what would humans be capable of if we were able to access more of our brain?'
Don't expect to find the answer in this film.