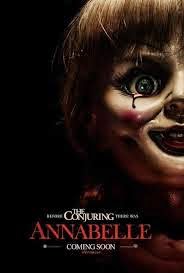 Synopsis- A supernatural horror which links to a previous film 'The Conjuring'; it follows the story of a young couple who are due to have their first child. The husband, John buys the perfect gift for his wife, Mia- a vintage doll that she has been searching for and it soon takes pride of place in their home. Her excitement is short lived when she begins to experience terrifying visions and surreal events happening in her own home. It is soon discovered that the doll has been possessed by a satanic cult and is after her newborn daughter's soul.

I had heard mixed reviews on 'Annabelle' beforehand but decided to give it a go myself, only to discover that it was a complete waste of time. Yes, it had the occasional jump scare but it was far too predictable and the storyline was a bit of a farce. Considering the film is based around the doll, we don't actually see 'Annabelle' torment the family and it is more about the satanic cult who possessed it. The narrative has no real depth and the story focuses more attention on the lead character rather than the actual doll. This was film was written and shot within 14 months and you can certainly tell; it was rushed, bland and not something I would ever watch again. The film tries too hard to outdo 'The conjuring' and although some scenes are eerie and build quite a frightening atmosphere, it continues to disappoint again and again.
After watching the film the first question I asked was, 'what exactly was the point in that film?' and that's definitely not a good thing. Overall I wouldn't recommend this film, if you're a fan of the horror genre and scare really easily then give it a watch but don't expect a story that will draw you in and keep you interested.