Hello guys!
I apologise that it has been so long since my last update but I promise I won't ever be gone that long again. I've missed writing up my reviews and I am looking forward to getting back into my routine.
So, to start us off I am going to review the new 'Insidious' film. 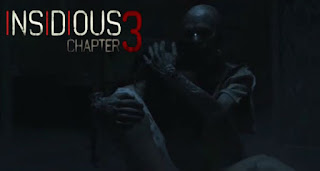 The story follows teenager Quinn Brenner who recently lost her mother, in an attempt to contact her on the other side she visits Elise (Lin Shaye) who warns her to stop. Quinn ignores her advice and calls out for her mother but opens the portal to some uninvited guests. When one demon in particular latches on to the young girl and starts a chain of horrifying events the only person who can bring her back from the darkness is Elise.

The first half of Insidious 3 provided me with much optimism, the opening scene with Quinn and Elise sets an ominous mood. The camera angles are rather intrusive, focusing entirely on their faces and giving the audience a sense of claustrophobia.
The insight into Quinn's life builds up her character and gives us some essential background information on her previous troubles and grief. The focus on her life means that it is much easier to connect and sympathise with her character.

Insidious 3 sticks to many conventions of the horror genre, there are many jump scares throughout; some of them are predictable and others catch you off guard but as the film progresses they become more and more frequent and less effective. The use of harsh string instruments in the non-diegetic music could be created to make the viewer feel uneasy and uncomfortable but again, it is used too many times throughout and loses the intensity.

I found that Lily having broken legs brought a whole new feel to the film, this makes her trapped and vulnerable. She is unable to escape and run away from the demon whenever it appears, making the viewer face it head on too. 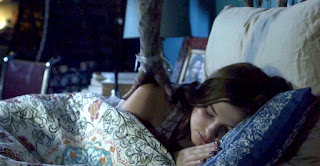 The lighting and camera work are nothing out of the ordinary, there is use of candles and torches which are typical of this genre but I wasn't expecting anything more from a third instalment. Insidious 3 started off strong, I assumed it was going to be much better than anticipated and had it carried on the way it started then I'm not sure I would have many bad things to say about it but after the first half things took a turn for the worse.
The excessive use of jump scares became a little bit of a joke, I was able to point out when every single one was about to happen and the character's lost all sense of being, there was a half-hearted attempt at creating sympathy for them at the end and make a touching scene but by this point I had already distanced myself from any goings on.
Another problem with the film is the appearance of comical character's; the two ghost hunters aren't even particularly funny but they definitely bring down the whole tone of the film and take back any credibility of Insidious 3 being a great horror.

The worst part of the film was the final showdown involving Elise, the dialogue is laughable and full of cliche's and the fight scene looked like something out of a wrestling ring. As far as horror films go it's not the worst I have seen and considering it is the third in line it's not as bad as I expected but definitely not something I would watch again. If you're a fan of the Insidious films then check this one out but don't expect too much from it.