Hello guys! I recently discovered that my favourite Cecelia Ahern book had been adapted in to a film called Love, Rosie so that was definitely next on my agenda. Although it's not my usual Saturday daytime viewing I thought I would check it out anyway so here we go. 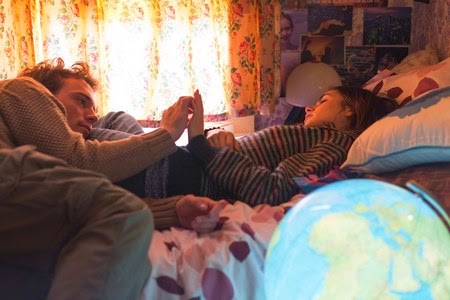 Rosie and Alex have been best friends from the age of 5 so their true feelings somehow get mixed up along the way. When Rosie unexpectedly falls pregnant at 18, she misses out on the opportunity to accompany Alex to Boston and life carries on throwing missed opportunities their way. Somehow the two of them are always drawn back together but will any of them realise that they are meant to be before time runs out and they miss that chance forever.

Okay, so I'm not one for cheesy rom-coms but Love, Rosie doesn't sugar coat everything and the ups and downs of Alex and Rosie's lives make this story even more intriguing. Lily Collins and Sam Claflin are wonderfully charming in their roles and it is almost impossible for you not to fall in love with them together. Of course the ending is predictable, it's a romance film and that is what we come to expect of them but that doesn't mean Love Rosie should be shunned because the acting and character development is rather beautiful and left me with a smile on my face. Love Rosie is lacking in the comedy department but I feel as though any more laughs and it would have taken away the true sentiment of the film.
Love, Rosie has a lot missing in comparison to the book 'Where Rainbows End' but that is understandable, as the book is rather long and does drag out this love story for several more years. The film adaptation does take away some key moments and character's but Christian Ditter has done a great job of bringing this story to life and it wasn't a disappointing adaptation. Some of the sub-plots are quite ridiculous and some parts of the story don't quite add up but they are quite easy to ignore, the whole narrative is created to focus solely on Rosie and Alex so the backing cast aren't really that important.
Different to any other story Love Rosie follows the couple through 12 years of separate failed relationships, missed opportunities and real life obstacles but we get there in the end and I wouldn't have wanted it any other way.

Definitely something I would watch again and will be suggesting it to my fellow romantics.