Evening guys! So after watching 'The Babadook' and '54 Days' earlier this year I decided to look in to Australian cinema in a bit more depth and one film that kept on cropping up was 'Snowtown'. Known for it's brutal and graphic storytelling I checked it out anyway and here is my review. 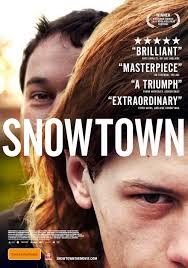 Snowtown is based on the brutal murders that took place in the Australian suburb during the 1990s. The story follows John Bunting who is a charming and charismatic man who becomes romantically involved with Jamie's mother. John takes up the role of a father figure to the boys and takes Jamie under his wing, a 16 year old boy who has been suffering from sexual abuse caused by his older brother Troy. Using fear and control over Jamie he makes him an accomplice to all of these horrific murders.

Snowtown is most definitely not an easy film to watch, there will be times when you want to look away but enduring the graphic and torturous scenes allows you to take a look at the psychological traits of Australia's most infamous serial killer.
Snowtown builds slow suspense, it gives the viewer the chance to watch the character's develop and understand their lifestyles and mindsets, this helps you to understand why Jamie was dragged in to such a mess and why Bunting found it easy to brain wash him.
The gritty, social-realism really works well in Snowtown and what makes the film even more terrifying is that it is based on actual events. The unknown actors, shaky cameras and unconventional shots give Snowtown a documentary feel which works well in it's favour. Justin Kurzel hasn't opted to glamourise the story and has done his best in creating a diegetic world that is truly representative of what actually took place.
My only qualm with 'Snowtown' is that it drags out for much longer than needed, there are certain parts throughout the film in which I lost interest but it never lasted long because another key moment would occur and have me hooked again. The film doesn't focus too much on the brutality and gore, (sometimes moving the camera away from the torture) and this was a great way to add tension, sometimes it's what we can't see that terrifies us the most.


Not easy to watch but an interesting look in to the psychological profile of John Bunting and Jamie Vlassakis.