So, it's that time of the week again where I dig out one of my all time favourite films and try and persuade you to watch it. This week I have chosen a fantastic war film that you need to see at least once before you die. Warning: you may shed a tear (or if you're anything like me, several) but it is a powerful and moving film that tells the story of a U.S Navy Seal team that are on a rescue mission in Nigeria.
So, without further a due, this week's film is; 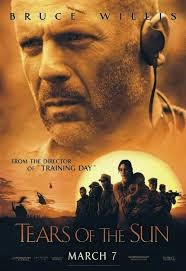 Bruce Willis stars as a soldier who has the dilemma and of choosing whether to follow orders or save the lives of many others.
Lt. A. K Waters and his team of Navy Seals are given a mission to escort any American citizens to safety and more importantly, Dr. Lena Kendricks but when she refuses to leave her people Waters has to decide whether to carry on and complete his mission or listen to his heart and help to save all of the people that have been left behind.


Okay, so the synopsis is a little vague but trust me, this film is worth watching especially if you're a fan of the war film genre. Bruce Willis takes up his usual persona of a hardcore soldier who is able to withstand anything  but as time carries on we see a softer side to his character. The story surrounds the war in Nigeria and the suffering that they had to endure. It can be hard to watch at times and always brings a tear to my eye but that is the reality of war and the brutal scenes aren't afraid to shy away from what really goes on.
I will give you a little tip before watching this film and that is to ensure you don't become too attached to any of the characters because you're setting yourself up for heartbreak.
Anyway, if you haven't already seen this movie then go and check it out especially if you like Black Hawk Down, Platoon and Saving Private Ryan.