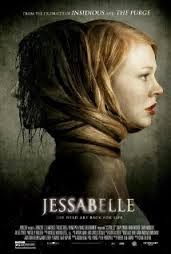 Jessabelle is a young girl who suffers a horrific car accident and has to return to her Louisiana home, where she discovers several VHS tapes that have been recorded by her now deceased mother. After suffering from terrifying nightmares she discovers that a malevolent spirit has been waiting for Jessabelle to come home and now she has her, she has no intentions of ever letting her go.

Another shallow attempt at a horror film. It lacks any real storyline and has so many unanswered questions that even when the film is over you're left wondering what actually happened. Sarah Snook does well in the lead role and is the only thing that makes this film bearable, her portrayal of a woman struggling to come to terms with her accident induced disability is sympathetic and believable but other than that, I have no more positives. Of course the film is full of cheap thrills and several jump scares but then again, so are hundreds of other horror films that just don't have the content to make it into a memorable movie.  The typical 'old countryside house' sets an eerie atmosphere but it's nothing we haven't seen before and the ending is completely absurd and doesn't quite tie in to everything else that has been going on, leaving me extremely disappointed and left with a lot of questions.