Hello guys, haven't done a film review for a while and today we had the pleasure of having a Q & A with successful screenwriter Leigh Campbell so I decided to watch 'Kicks' and write up my own review so here we go... 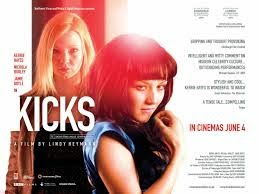 Two teenage girls strike up a friendship through a mutual obsession with a young footballer. One night they encounter Lee at a local nightclub and manage to entice him back to their caravan but things take a horrible turn when they discover that Lee and his team mates have a twisted perversion when it comes to humiliating young girls. Nicole decides to take revenge by keeping Lee tied up and threatening to end his career with a gun shot wound to the foot but will she go through with it?

The film's opening is atmospheric and even without the use of any dialogue, it allows the viewer to get an insight in to one of the main character's and the locations. There are several establishing shots of the city of Liverpool as we follow Nicole on her journey through the empty streets and it's impressive how the viewer is able to learn so much about this character just with the use of key shots. It takes a certain skill to pull off an opening that grabs the viewer's attention without using a single line of dialogue but as the film went on I became more and more disappointed. Although 'Kicks' gives off a sense of social realism, I found it extremely difficult to invest in the characters and there wasn't an awful lot of depth to them. Nicole (Kerrie Hayes) is slightly unpredictable and I found that her character traits changed throughout the film; this could be due to her erratic obsession with Lee but it seemed to switch in and out of credibility all of the time.
Of course the film's interesting topic surrounding celebrity culture and teenage obsession is enthralling but personally, I felt as though there was so much more that could have been done with this and the girls' obsession with breast implants and WAGs portrays younger girls in a less than positive light.
'Kicks' is a low-budget, independent film and although it does well with the materials available the climax is extremely disappointing and lacks any real drama. If you're looking for a gripping, urban, thriller that's challenging and thought provoking, then I'd suggest looking elsewhere.