Before I go to sleep

Hello again guys! I have managed to cram a couple of films in this weekend, one including Rowan Joffe's 'Before I go to sleep'. I had a little nosey on the internet and have read several bad reviews but I never judge a film based on what other's think, I much prefer to watch it myself and decide. 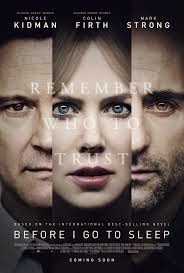 After suffering a traumatic attack Christine (Nicole Kidman) suffers from anterograde amnesia and is unable to create new memories, meaning whenever she wakes up she has to become reacquainted with her husband and her whole life. Christine begins to visit a doctor who persuades her to keep a video diary, in order to keep up to track with each new day but as she does this she begins to uncover some dark secrets about her own past and has no idea who to trust.

From the word go, the viewer is thrust into the disorientating atmosphere of Christine's life with very little given away in terms of characters. The ominous music makes for uneasy viewing at the beginning, causing a sudden distrust of Christine's so-called husband 'Ben' but as we are introduced to doctor Nash, it causes a string of doubts. The constant flickering between flashbacks and the present day are disorientating and allow the viewer to be much more than a spectator but the clever editing doesn't hide the fact that 'Before I go to Sleep' is extremely predictable and struggles to hold the suspense.
It's a welcoming change to see Colin Firth play a darker character and his take on 'Ben' is another positive factor in this film. Firth has a certain look about him, he tends to be perceived as a harmless, genuine guy but that makes it even more exciting for the viewer as we struggle on whether to trust him or not.

To be completely honest, I very much enjoyed 'Before I go to Sleep' and although it was rather predictable and had several flaws, it did the book justice and it's something I would probably watch again in the future. My only problem is the ending; it was a welcome surprise that everything was resolved and sentimental because I was expecting a dark twist but parts of it didn't make sense. Yes, Ben had made it clear that he had to stay away from Christine for the sake of their son but couldn't he have at least called the care home she was staying in? If he had even an ounce of love for his suffering wife then he would have called the care home and realised she was missing straight away but instead he buried his head in the sand and allowed some psycho to take care of her which I find incredibly unbelievable.