Hello my beloved readers, I apologise for being inactive over the weekend. It was my birthday on Saturday and I've had to organise my time between working and seeing family.
BUT it's that time of week again where I suggest one of my all time favourite films to you and this week that film is; 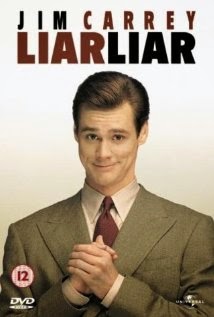 I don't usually suggest comedies but I thought I'd revert back to my childhood and give you a little insight in to one of my favourite Jim Carrey films. I have watched this film so many times and I will never get tired of it, if you're looking for a light-hearted, laugh out loud comedy with an underlying sentimental story then Liar Liar is a must see. Carrey is a comedic genius and puts his heart and soul in to his characters, it's very difficult to dislike any film he makes an appearance in.

Liar Liar follows the story of Fletcher Reede who is a fast talking, lawyer and makes his money from telling lies. As a divorced father he struggles to find the time for his son and constantly makes up excuses which causes Max to make a birthday wish which involves his father only being able to tell the truth for the next 24 hours. When the wish comes true Fletcher realises just how much he relies on his own lies and with a big case coming up he has to find a way to win for his client and win back the heart of his son with nothing but the truth.

If you haven't seen Liar Liar then rent it out, buy the DVD or borrow it from a friend because I promise you won't regret it. This film has the ability to make you laugh out loud even on a bad day and keep an eye out for the elevator scene, it has me in tears every single time.
Posted by Unknown at 06:03