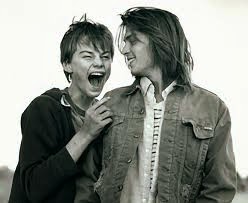 Synopsis:
The film follows the story of Gilbert Grape, a young man living in a small, dead-end town. He spends most of his days working at the local grocery store and caring for his younger brother Arnie, who suffers from a mental disability and his morbidly obese mother who is trapped in her own home. It's not until he falls in love that he realises how consuming his family ties actually are.

Okay, so I'm probably completely biased towards this film because it was one of the first films my mum introduced me to when I was younger and it was one of our favourites but watch it for yourself and you'll see why it has a firm place in my heart.
Young DiCaprio plays Arnie Grape, a boy who suffers from a mental illness and he takes up this role in a truly remarkable fashion. His performance is so powerful and moving that it always brings me to tears. Depp on the other hand plays Arnie's older brother 'Gilbert' a hard-working young man who's under an insane amount of pressure to take care of his younger brother and his morbidly obese mother.
What's eating Gilbert Grape is somewhat predictable but that can be excused because it's such a beautifully sentimental film. It shows us that in a small town where nothing much goes on, there are people who are the true heroes of every day.